You are here: Home › Homeownership › Homeowner Story – Safe from the Flood and Room to Grow

Homeowner Story – Safe from the Flood and Room to Grow 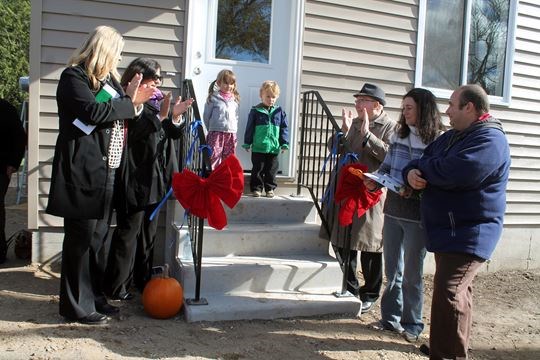 Homeowners Steve and Cindy with children, Sally and Roland at their House Sale Celebration in October 2015.

In February 2018, sometime after midnight, Habitat for Humanity Brant-Norfolk homeowners Cindy and Steve were up late visiting with a friend from out of town.  Their children slept soundly on the second floor of their 3 bedroom Habitat home, across the road from the Grand River in Brantford. Cindy recalls hearing sounds that night, like an army crashing and smashing through the river. In the morning, 15-year-old Keifer got up, got ready and began his usual walk to the high school nearby.  Steve, who is a trained chef and works afternoon shifts, was just starting to begin his day. Cindy was making breakfast for their two younger children, Sally was 7 at the time and Roland 5. Their house guest was still asleep.

A knock came to the door.  It was the police, advising the family they were in a flood zone but they had time to pack and prepare.  Steve and Cindy moved into action, calling Steve’s father to come and get them, as they rely on public transit. Their guest joined them, gathering clothes for the kids and personal items. Then another knock came to the door. “Get out now, now, now!” the police were yelling.  The ice and water had broken up over the bank and was rushing toward the house. The family ran out the back door. No coats, no boots. The kids were in their pajamas and sock feet. Cindy was in her slippers. Steve had no shoes for work. They were able to pile into two cars and were whisked away.  Everyone was safe.

Hours later, Cindy was allowed to return to the house briefly to gather coats and boots.  The City of Brantford had called a state of emergency. The family stayed at the local Best Western for a couple days, where Steve now works full-time.

Upon returning after the flood, their neighbours were pumping out massive amounts of water.   With anxious trepidation, Cindy and Steve opened the door to their Habitat home. With relief, they discovered their Habitat home was safe and dry, even though ice and water had rushed toward their front stoop and several feet up the front wall.

In November 2015, they had become Habitat homeowners. “It’s kind of scary to think back on the day of the flood and there’s some big changes when life happens and you’re a homeowner too,” admits Cindy, “but we’re really grateful for our Habitat home.  It’s safe and it’s giving us all room to grow as a family. That’s something we didn’t have before and it’s difficult to put into words how much it means to us.”